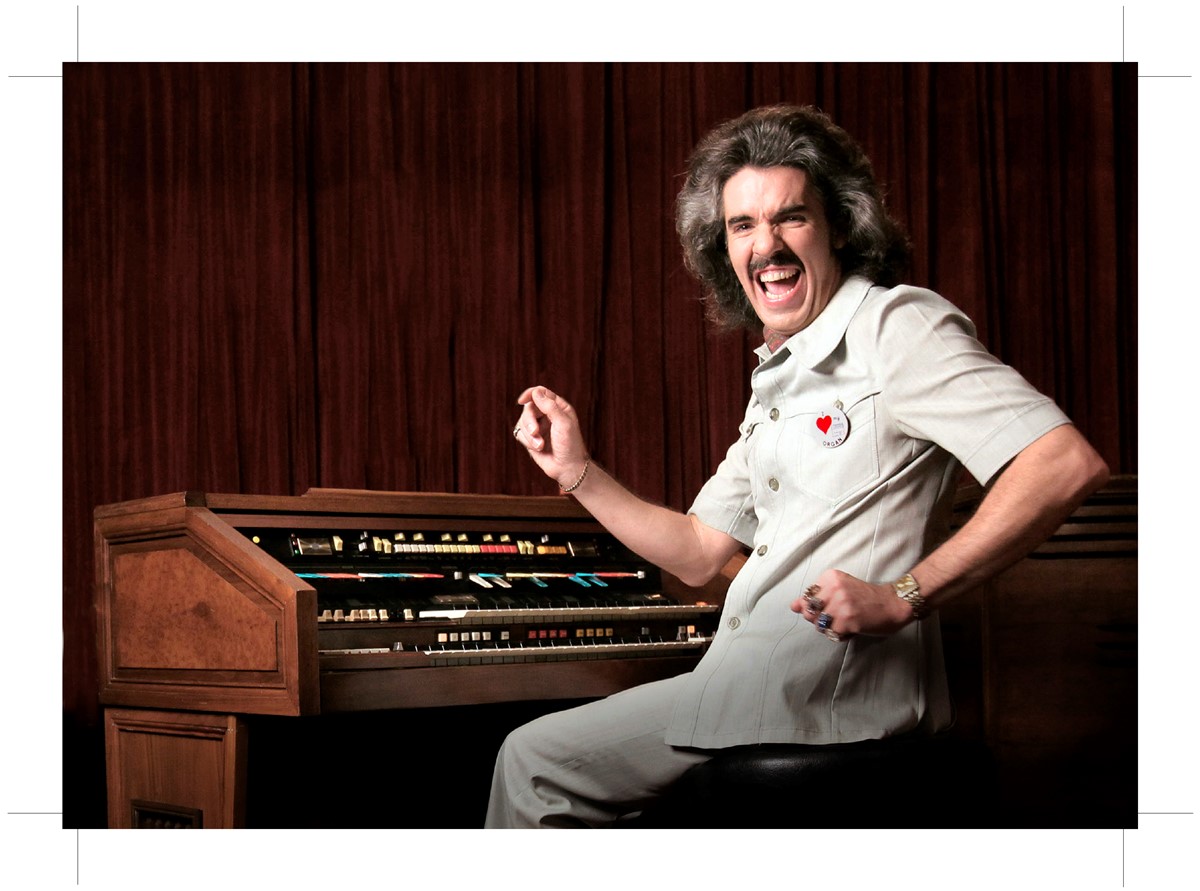 “He puts the Boss in Bossa Nova, the Yes in Polyester, he’s the patron saint of the safari suit: he’s Barry Morgan”, and is the celebrity organ salesman (performed by musician/performer Stephen Teakle) who is wooing audiences with the golden syrup sounds of his vintage 1980s, Hammond Aurora Classic.

When Barry’s not in his World of Organs Superstore in the Sunnyside Mall, in the beautiful city of Churches, Adelaide, you can find Barry touting the joy of the organ to audiences far and wide. A highlight for Barry has been touring Australia

in 2012 with international superstar Gotye. Barry’s enthusiastic manner, contagious smile and musical skill all help convey his deep love of organs. The rich and rollicking musical sounds of the Hammond are projected from a classic veneer speaker cabinet and the impressive array of the organ’s keys, buttons and lights are caught on Barry’s cockpit cam and displayed on large screens either side of stage. With enough cheese to match his infectious smile, the organ’s various sounds and features are exploited by Barry to achieve velvet tones, luscious lounge, exotic tangos, and grooves “as modern as tomorrow”. Barry’s hilarious performance creates an utterly charming visual and aural experience that cannot be resisted.

Plucked from obscurity to perform on ABC TV’s Spicks and Specks, Barry Morgan became an instant audience favourite. Barry was invited back to perform on “A Very Specky Christmas”, and had the incredible honour of closing with a stellar cast from Dan Sultan to Hamish and Andy. After appearing on the Spicks and Specks Finale in late 2011, he trended number 2 on twitter in Australia and was voted number 3 as the best Spicks and Specks moment. Since then, Barry has also graced our TV screens on In Gordon Street Tonight, The Marngrook Footy Show and The Circle’s Royal Wedding Special.

Barry has also sold out live shows across the country including the Sydney Comedy Festival, Melbourne Comedy Festival, Adelaide and Perth Fringe, the Famous Spiegeltent and performed to adoring young crowds at the Homebake and Falls Festivals. In 2012, Barry travelled overseas to demonstrate his organ at 2012 NZ Comedy and Edinburgh Fringe Festivals.

His organ advocacy has been taken to a new level with the launch in 2012 of his debut album, “The Touch of You” (Perambulator Records) an album that proves that Barry Morgan is not just one of Australia’s most entertaining performers but also one of its most accomplished musicians. Featuring the single, “Big Bossa” it is already the most popular organ-based album in Australia this year. The album covers all musical styles including waltz, bossa nova, Two-step and old – fashioned rock and roll, all played using Barry’s famous one-finger method.

“Whatever the reason, DO NOT MISS THIS SHOW!!” ***** Johnathon Graham, FunnyTonne

"The show is a triumph of character comedy with a broad appeal. See it. Enjoy It. Buy an organ.” **** Scotsgay, Edinburgh

'The stuff cult figures are made of. Allow him to make your festival.' **** The List, Edinburgh

“YOU'D have to have a heart of stone not to love a well- coiffed, safari-suited organist extraordinaire”**** Megan Miller, Herald Sun, Melbourne

"With one hand on his organ and another on the pulse of his audience, cult hit Barry Morgan unleashed his 1981 Hammond Aurora Classic on an enthusiastic crowd. ****" The Advertiser, Adelaide Feb 17, 2011

“This is entertainment with a capital E. Who knows, Adelaide’s own Barry Morgan may yet become this city’s greatest icon. Bigger than Don Dunstan, bigger than Bung Fritz!” Indaily’sBlog – Fringe Reviews music, Peter C Pugsley