Join us for this rare treat with a quartet masterful musicians taking you on a sonic journey across the world.

Four artists of very diverse musical and cultural backgrounds, Equus features the traditional music of Mongolia, sung by world renowned Mongolian throat singer Bukhu Ganburged, fused with Middle Eastern strings and wind and a dynamic rhythm section, with a strong component of improvisation to making each performance a new experience.

At the helm, Bukhu Ganburged combines virtuosic Morin Khuur (Horse Head Fiddle) and Khuumii (Harmonic Overtone Throat Singing) to transmit the music of Mongolian nomads and Shamanic culture through time and space. A master student of the Music and Dance Conservatory of Ulaanbaatar, Mongolia, Bukhu was granted the most prestigious Distinguished Talent Visa (2015) by the Australian government as an internationally recognised artist with exceptional and outstanding contributions to the arts.

Performing at the 2012/13 Woodford Folk Festival, Bukhu had a chance meeting with fellow musical travellers and soon the band Equus was formed. More than just a fusion of four eclectic talents, Equus are creating a style all their own. With a mesmerising palette of sounds, high energy performances and improvisations, there's a real buzz wherever they perform.

This music is about meetings, of people and traditions, and of music.

..."One of the most evocative albums I have heard ...This is pure musical pleasure, exciting, fun and challenging, all at once."    Music Forum magazine 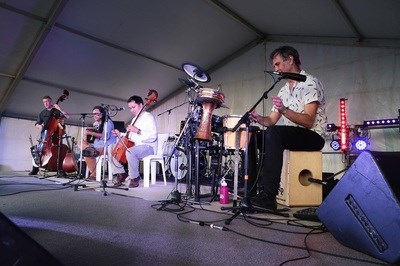