THE MAES (with MONIQUE CLARE)
Live in Concert at Pigeon Lane @ ONE88.


Fusion Boutique is very pleased to announce that due to popular demand a 2nd and final show is now being held at Gallery ONE88's fabulous little exclusive speak easy venue 'Pigeon Lane'.
This will be a very special intimate acoustic performance.

Multi-award-winning Melbourne contemporary folk outfit, The Maes (formerly The Mae Trio) is the brainchild of sisters Maggie (banjo, guitar and vocals) and Elsie Rigby (fiddle, mandolin and vocals). Born into the arms of the Folk music community, both sisters were side of stage at their first folk festival when they were four weeks old and have been absorbing and exploring folk music since that time.


The Maes’ latest, self-titled record released in April 2019 is a return to the sisters’ folk music roots. Gentle, intimate and conversational, the album is an unadorned showcase of Maggie and Elsie’s superb songwriting as well as honest, relaxed and stunning vocal and instrumental performances.

The album was born on a two-month tour of Europe and North America in 2018 shortly after the band changed its name from The Mae Trio to The Maes after the departure of founding member Anita Hillman. The sisters started the tour with a recording session in Canada, intending to make a four track EP. Fired up by the changes in the band, inspired and bursting with new music they kept looking for new recording opportunities as the tour progressed. By the end of the tour they had two tracks from Nova Scotia, Canada, two songs from the Isle of Mull in Scotland, two songs from different studios in Ireland and four songs recorded in their hometown of Melbourne.

Their latest release follows on from their sophomore album, Take Care Take Cover, which was recorded in Nashville by Grammy nominated producer/engineer Erick Jaskowiak (The Waifs, Crooked Still, Darrell Scott) and featuring some of that music town’s finest roots musicians. The record won them the Age, Music Victoria Folk/Roots Album of the Year in 2017 as well as rave reviews in Australia and overseas.

Since 2014, The Maes have been full time touring in Australia and overseas, winning over audiences with their striking songwriting, intricate instrumental arrangements and stunning vocal harmonies. The band’s touring history includes a list of some of the worlds largest and most prestigious music festivals such as, the Woodford and Port Fairy Folk Festivals in Australia, The Edmonton and Vancouver Folk Festivals in Canada, Cambridge Folk and Celtic Connections festivals in the UK and the Telluride Bluegrass Festival in the USA.

“…underscores the ever growing potential these girls have to capture a truly international stage.’ – Folk Radio UK

“The Mae Trio songs are powerful, the vocal harmonies soar, and their own instrumental prowess is impressive” – Penguin Eggs

"Located at a crossroads where Australian, English and American folk traditions meet, The Mae Trio are in the midst of creating something unique and very much their own" – Songlines

Venue: PIGEON LANE @ ONE88 (Lower level of Gallery One88 which is at 188 Katoomba St)
Access to the performance space is via the graffiti Art Street walk of Beverly Place, Katoomba, Blue Mountains NSW 2780.

Pigeon Lane @ ONE88 is an intimate venue tucked away in the lower ground floor of art gallery ONE88 Fine Arts in the heart of Katoomba. The venue harks back to prohibition style speak easys where you could enjoy Jazz and Blues along with the atmosphere that the venues brought with it.

Pigeon Lane is an all ages venue however minors must be accompanied by a parent or legal guardian and must remain supervised and do require a standard ticket for entry. Please also keep in mind that the performance space is a listening room.

Hot beverages including coffee, chai, hot chocolate and tea as well as treats such as cakes and soup are available for purchase from the upstairs Art Gallery before and after the show.
Please note that this is an alcohol free event.

*This is an exclusive intimate capacity venue and tickets are strictly limited! 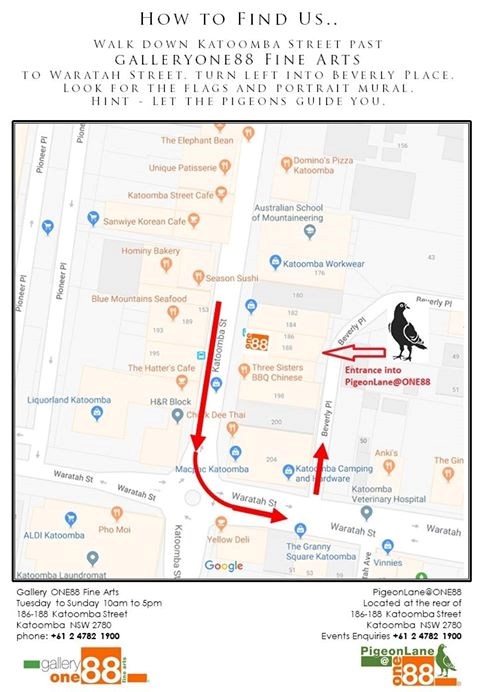 No refund, Refunds are only available when an event has been cancelled or rescheduled or where required by Australian Consumer Law. Incorrect purchases or a change in ability to attend will not be approved. It is the buyers responsibility to resell if required.

No refund, Refunds are only available when an event has been cancelled or rescheduled or where required by Australian Consumer Law. Incorrect purchases or a change in ability to attend will not be approved. It is the buyers responsibility to resell if required.