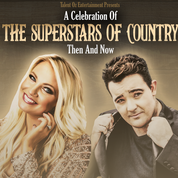 Two of Australia’s most popular and loved singing stars, Hayley Jensen and Jason Owen, come together for the first time in a spectacular new 2 hour showcase, featuring songs from the biggest country music superstars of our time, both then and now, as well as performing hit songs for their own successful, multi-award winning careers.

The first half of the show will feature the most popular songs as performed by the legends of country music, including: Dolly Parton, John Denver, Patsy Cline, Linda Ronstadt and Willie Nelson, just to name a few. In this part of the show, Jensen and Owen will also honour our very own Australian country music great, Slim Dusty.

After intermission, set two will open with a bang! Shining a spotlight on some of the most loved modern country superstars of today, such as: Shania Twain, Carrie Underwood, Lady Antebellum, Garth Brooks and Keith Urban.

The show will feature a tasteful mix of ballads and up-tempo numbers, solos, medleys and moving duets, all arranged especially for The Superstars of Country: Then & Now, backed by some of Australia’s finest musicians.

Hayley Jensen has wowed millions of music lovers for over a decade. From when she first won hearts and became a household name in the 2nd season of Australian Idol, to her electrifying return to TV with a ‘chair-turning’ blind audition on The Voice in 2014.

Hayley is also a chart topping recording artist in her own right, with her sophomore album, 'Past Tense & Present Peace' debuting at #1 on iTunes Country Chart, and her latest release ‘Turning Up The Dial’, produced by a Grammy Award winning producer in Nashville, TN, reaching #3 on the ARIA Country Album Charts, amongst esteemed country icons, Keith Urban and Kasey Chambers. Hayley’s success in country music has been recognised with an Australian Independent Country Music Award and Finalist position in the 2018 Country Music Channel (CMC) Awards. Jensen has just returned from Canada, where she was invited to perform as an International headline act at Dauphin CountryFest, Manitoba, and the Calgary Stampede.

Bursting onto the Australian Music Scene in 2012 as runner up of X-Factor, Jason Owen launched his debut album ‘Life Is A Highway’ which debuted at #1 on the ARIA Country Albums Chart and #5 on the Australian National ARIA Chart.

Jason has since released three more albums; ‘Friday Night’ containing his first original hit Damn Right, Proud, his first all-originals album celebrating his First Nations background and featuring Australia’s most iconic female Indigenous entertainer Christine Anu on the title track, and ‘Jason Owen Sings John Denver: 20th Anniversary’ tribute album, a labour of love dedicated to his grandfather. With a Golden Guitar and three Country Music Channel (CMC) Award nominations to his name in categories including New Oz Artist of the Year and Male Artist of the Year, Jason has made his mark on Australian music. His popularity is fuelled by his ability to connect with his audience through songs that capture our shared experiences

A one of a kind show, not to be missed!

Thanks to Talent OZ Entertainment

COURTESY BUS WILL BE AVAILABLE.