"She's known for having an extraordinarily rare voice" - CLARE BOWDITCH

The South Australian Award Winning Songwriter is one of those artists who's unique style simply cannot be put into a box.

From big blues to soulful country, it is music that is real and raw and vulnerable.

"it's just so much fun, that girls got amazing pipes, she sounds like Amy Whinehouse - but with more of a soulful edge as opposed to a jazz hook"NKECHI ANELE - TRIPLE J ROOTS AND ALL
Releasing her debut album in 2019, the Americana artist has had many a success including ABC radio rotation, #1 AMRAP radio charting and inclusion on hit country Spotify playlists. A keen traveller, her heavy touring schedule spent most of 2018-2020 on the road with country legend Beccy Cole collecting a legion of cult like super fans along the way, easily spotted by the "Brouhaha Brouhaha Brouhaha" catch-cry.

Whether around a campfire, in RSL's or in the intimate setting of people's living rooms - this is an artist you simply need to hear. Her captivating live show will have you giggling one minute and in tears the next as she tells stories about her travels, her family and her much loved 1992 Toyota Hiace "Pamela Vanderson".

"I really don’t know if we have anyone similar in Australia, I am pretty sure that we don’t. She has similar elements of other artists from overseas, and maybe a touch of Renee Geyer, but basically, she is a one-off. In a close tunnel genre in Australia, Kelly is Queen. She is a no-nonsense, firebrand" COWGIRL UP BLOG 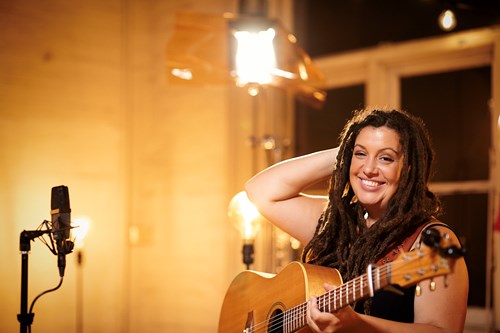