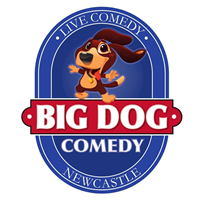 Big Dog Comedy presents "Got Your Back Sista" @ 5 Sawyers - Completed

Big Dog Comedy presents "Got Your Back Sista" @ 5 Sawyers

A comedy evening showcasing an all female lineup at 5 Sawyers supporting "Got Your Back Sista"
Got your back Sista's offers benevolent relief and support to women and children escaping domestic violence and are at risk of living below the poverty line. We give a hand up for them to begin again and live independently.

Going to a Nikki Britton show feels like smashing a bottle of pinot with your best friend.

Nikki has been invited to perform at clubs and festivals around the globe for almost a decade, and with good reason. Her no filter, tour-de-force style has audiences falling off chairs with laughter and falling in love with her. And Once Bitten is her best show yet.

Don’t miss this sparkling show of stand-up which will leave you bitten by the Britton bug. It only takes on bite.

As seen on The Melbourne Comedy Festival Gala, Channel 10’s How To Stay Married, The Project and the comedy channels Just For Laughs festival.

“Few comics reduce their audience to the constant waves of laughter for the full hour like Britton does.” Chortle

Emma made her on screen debut on Thailand’s Got Talent – a true story which we’re not going to spoil for you here. She went on to play the female lead for a well-known condom brand and has appeared on Nickelodeon, the Darren Sanders Show, Studio 10 – and even managed to land the role of the “before” for a diet shake commercial. Her solo show If You Can’t Train It, Eat It introduces Australian audiences to her quick wit, audience interactions, high energy… and of course her many-legged co-stars.

‘English rose’ Emma will open her charming, yet oh so dirty mouth and tell you things that David Attenborough never would. No animals were harmed in the making of this hilarious show.

Kathryn is a stand up comedian who has been performing consistently all over the state for the last year (inc Cafe Lounge, The Comedy Store, Powerbomb Comedy).

Kathryn is originally a theatre performer who has recently transitioned into comedy. She recently opened for Becky Lucas and Chris Ryan for Sydney Comedy Festival.
Kathryn is a 2019 RAW National Finalist for NSW and her queer, relatable and boisterous charm has her climbing the ranks of Australian comedy.